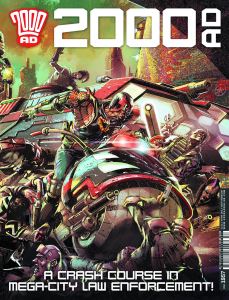 NM Price:
$26.00
Release Date:
4/27/2016
Issue not yet rated - You rated this a 0
Previous Issue Next Issue
Issue description
Writer: Various
Artist: Various
Blazing SF action from the Eisner-nominated UK anthology! Judge Dredd must stop a peace treaty going south with the help of Sensitive Klegg in "Undercover Klegg" by Rob Williams and D'Israeli; The Order battle for their lives in the skies above Elizabethan London, courtesy of Kek-W and John Burns; Gene the Hackman makes a last stand in Kingdom: "Beast of Eden" by Dan Abnett and Richard Elson; the ABC Warriors take the war to Howard Quartz in the finale to "Return to Ro-Busters"; and Johnny Alpha and his fellow S/D agents have an asteroid to repossess in Strontium Dog: "Repo Men" by John Wagner and Carlos Ezquerra. Then in Prog 1973, a brand-new line-up commences, featuring Dan Abnett and INJ Culbard's deep-space police procedural "Brink," the return of the Survival Geeks in "Geeks Fatales" by Gordon Rennie, Emma Beeby and Neil Googe, and the start of one of the year's biggest Dredd stories as the lawman tackles mutant raiders the Grindstone Cowboys by Michael Carroll and Colin MacNeil!