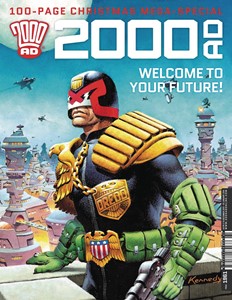 NM Price:
$20.80
Release Date:
5/25/2016
Issue not yet rated - You rated this a 0
Previous Issue Next Issue
Issue description
Writer: Various
Blazing SF action from the Eisner-nominated UK anthology! Judge Dredd chases down mutant bandits in "The Grindstone Cowboys" by Michael Carroll and Colin MacNeil, but tragedy awaits, and will have major repercussions for Mega-City One. Meanwhile, in "The Lion's Den," by Michael Carroll and PJ Holden, Judge Joyce is on the run in Brit-Cit, not knowing who he can trust. Elsewhere, the male and female counterparts of Survival Geeks join forces against their enemy in "Geeks Fatales" by Gordon Rennie, Emma Beeby and Neil Googe; minds are being lost out in the depths of space in police procedural "Brink" by Dan Abnett and INJ Culbard; servant of the Devourer Aquila seeks out a necromancer in "Charon's Mercy" by Gordon Rennie and Paul Davidson; and we witness first-hand the rise of the Dark Judges and how they took their world in "Tainted: The Fall of Deadworld" by Kek-W and Dave Kendall!