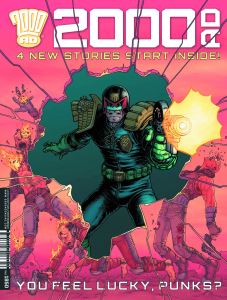 Blazing SF action from the Eisner-nominated UK anthology! Johnny Alpha and his band of S/D agents are up to their necks in trouble as they commit galactic heresy in Strontium Dog: Repo Men by John Wagner and Carlos Ezquerra; the droids of Ro-Busters are facing redundancy and that can only mean disintegration in ABC Warriors: Return to Ro-Busters by Pat Mills and Clint Langley; Kingdom comes under siege by Them and Gene the Hackman must lead the fightback in Beast of Eden by Dan Abnett and Richard Elson; the Order are hunted across Elizabethan London by agents of the Crown in The Order: In the Court of the WyrmQueene by Kek-W and John Burns; and future lawman Judge Dredd discovers a conspiracy at the heart of Justice Department in the climax to Ghosts by Michael Carroll and Mad Max: Fury Road artist Mark Sexton!