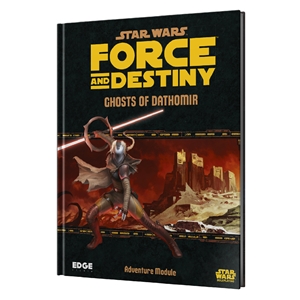 The absence of the Jedi Order has cast a veil of darkness over the galaxy, leaving those sensitive to the Force wandering without guidance. It is a dangerous time to be learning the ways of the Force, seeking the scraps of Jedi teachings while avoiding persecution at the hands of the Empire and temptation of the dark side. In Ghosts of Dathomir, unraveling the history of a statue with ties to the Force could lead you to either great power or your own destruction. Which is your destiny?

Fittingly called Tragic Hope, a mysterious statue has appeared up for auction on Toydaria, and you and your party aren't the only ones with an interest in its future. Can you trace its cryptic path while avoiding entangling yourself in Hutt politics or Imperial affairs? And what of Jerserra, the vicious mercenary who wields the Force in terrifying new ways? She seeks Tragic Hope with a passion that suggests a personal stake in the statue and seems to know more about its whispered ties to the dread world of Dathomir.