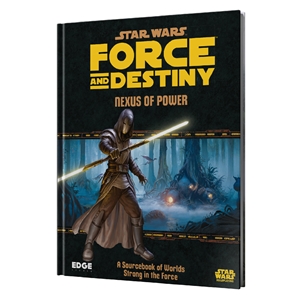 At certain places throughout the galaxy, known as vergences, the Force is extraordinarily strong. The most renowned Jedi temples rest atop these sites; and some planets like Ilum, Dagobah, and Ossus also share deep connections with the Force. Nexus of Power, a sourcebook for the Star Wars: Force and Destiny Roleplaying Game, details these miraculous sites, introducing four new playable species (Aleena, Bardottans, Devaronians, and Gungans) and eight modular encounters which can be played as single-session adventures or used as launching points for extensive campaigns.