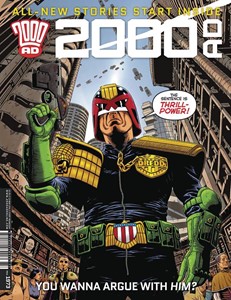 NM Price:
$20.80
Release Date:
9/14/2016
Issue not yet rated - You rated this a 0
Previous Issue Next Issue
Issue description
Writer: Various
Blazing SF action from the Eisner-nominated UK anthology! It's the final battle to reclaim the Grand Hall of Justice in the explosive climax to Judge Dredd: "Reclamation" by Michael Carroll and Colin MacNeil before a familiar murderous face reappears in a story so shocking we can't even reveal its name, courtesy of John Wagner and Carlos Ezquerra; Black Shuck fights for the souls of his unborn children, by Leah Moore, John Reppion and Steve Yeowell; secrets of the universe are revealed in the finale to Brink, by Dan Abnett and INJ Culbard; and two new series commence — the War of the Worlds follow-up Scarlet Traces joins 2000 AD for the latest chapter, Cold War, by Ian Edginton and D'Israeli, and there's a vengeful T-Rex on the loose in Flesh: Gorehead by Pat Mills and Clint Langley!