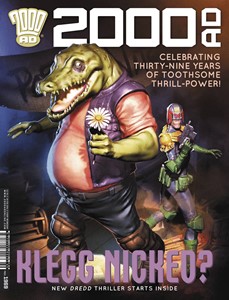 NM Price:
$26.00
Release Date:
8/3/2016
Issue not yet rated - You rated this a 0
Previous Issue Next Issue
Issue description
Writer: Various
Blazing SF action from the Eisner-nominated UK anthology! In Judge Dredd: "The Lion's Den" by Michael Carroll and PJ Holden, Judge Joyce teams up with a familiar ally before the fightback in Mega-City One begins in "Reclamation" by Michael Carroll and Colin MacNeil. Psi-Judge Anderson returns in "The Candidate" by Emma Beeby and Nick Dyer as a mayoral candidate becomes the target of the Citizens' Army; the habitats are going sects-mad in "Brink" by Dan Abnett and INJ Culbard; Celtic warrior Slaine battles a zombie Trojan army in "Psychopomp" by Pat Mills and Simon Davis; and it's the final fight against the God-Star in Grey Area by Dan Abnett and Mark Harrison!