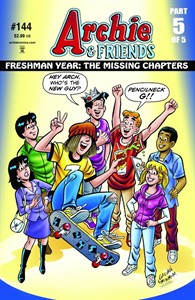 NM Price:
$2.99
Release Date:
6/9/2010
Issue not yet rated - You rated this a 0
Previous Issue Next Issue
Issue description
Writer: Bill Galvan Batton Lash
'Freshman Year, the Missing Chapters: Pencilneck G' In this follow-up series to the best-selling 'Freshman Year' saga, writer Batton Lash gives readers an even bigger glimpse of what went on during the Freshman year of the entire gang. Pencilneck's circle of friends adjust to their own move from middle school to high school. Along the way, Pencilneck's obsessive nature drives the school's librarian crazy, his pal Zane develops a crush on Veronica, Penelope considers Betty her new 'BFF,' and Connie tries to make Zane jealous by going after Reggie!