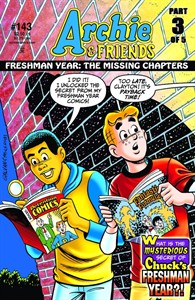 NM Price:
$2.99
Release Date:
5/5/2010
Issue not yet rated - You rated this a 0
Previous Issue Next Issue
Issue description
Writer: Bill Galvan Batton Lash
'Freshman Year - The Missing Chapters: Chuck.' In the 'Freshman Year' saga, readers learned the back-story behind Riverdale's fabled cast of characters. But that wasn't the whole story! Chuck's cartoons of the past come back to haunt him when word gets back to him that a tough kid took exception to Chuck's caricatures. The subject of Chuck's doodles isn't happy about being 'dissed' and has held a grudge for three years! Now Chuck must look back at the copious comics he did in freshman year to see what he did to diss his classmate!