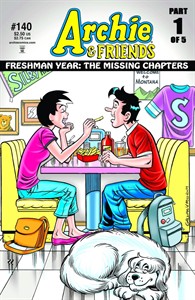 NM Price:
$2.50
Release Date:
2/10/2010
Issue not yet rated - You rated this a 0
Previous Issue Next Issue
Issue description
Writer: Bill Galvan Batton Lash
'Freshmen Year - The Missing Chapters: Jughead.' In the 'Freshman Year' saga, readers learned the backstory behind Riverdale's fabled cast of characters. But that wasn't the whole story! Now writer Batton Lash fills in the blanks, giving readers an even bigger glimpse of what went on with Jughead, Betty and Veronica, Reggie, Chuck, and Pencilneck G. In this issue, we follow Jughead as his family moves out of Riverdale. What is life like in his new town? Can he make a friend as loyal as Archie? Who is Sadie - just a friend, or something more?