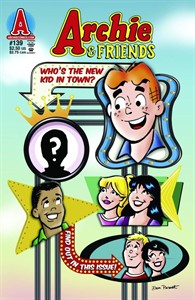 NM Price:
$2.50
Release Date:
1/13/2010
Issue not yet rated - You rated this a 0
Previous Issue Next Issue
Issue description
Writer: Dan Parent Alex Simmons
Featuring the winner of the special Kids' Comic Con/Time Out New York competition! When Betty and Veronica babysit a girl named Summer, they're in for a 'Summer Spring Show,' and they're the stars! Summer is a 'showbiz kid,' and she literally shines the spotlight on Betty and Veronica as she engages them in interactive skits, songs and more! Summer was the winner of the special contest at this year's Kids' Comic Con, with the grand prize being the chance to be drawn into an Archie comic book! Summer chose Betty and Veronica, and now, just like her faves, Summer is a part of comic book history!