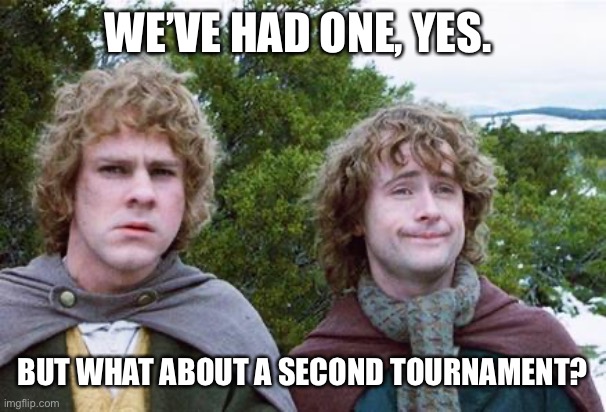 “I think I'm quite ready for another adventure.” – Bilbo Baggins

The Citizens of Atomic Empire cordially invite you to our second tournament for the Middle Earth Strategy Battle Game. We, the hosting parties, request the pleasure of your company at our humble store in Durham, NC on the 21st and 22nd of January in the year 2023.

Event Details: Scenario Details:
Tables will be set up with terrain so no modifications to terrain will be allowed without the tournament organizer’s permission or after the first game begins.
Scenarios will be chosen using the veto system. Each round players will be given a pool of missions from the Matched Play Guide and alternate vetoing missions. Each Round players will roll off. The player who rolls highest may elect to take either the first veto or choose which list to play (should they have the option). If the highest rolling player chooses to veto - then the opposing player will select their faction (see: List Restrictions) so that both players have factions determined prior to the veto process. If the highest rolling player chooses their faction - then the opposing player will select their first veto as they would be playing the opposing faction. In either case, players alternate eliminating one of the missions from the provided pool until only one remains. This may result in tables playing different missions but it will ensure they are of a similar theme each round.

Lists can be submitted via email to byerswarhammer@gmail.com on or before January 13th and it is requested that you bring a hard copy of your list to the event.

Scoring during the tournament will be per the Additional Rules from the Matched Play Guide. Pairings and scores will be tracked via the Best Coast Pairings (BCP) app; having the app is not required to participate in this event.

Further Notes:
If you are interested in bringing terrain, paint judging, submitting painting exemptions, being added to the waitlist, expressing concerns regarding any particular model/proxy, or sponsoring/donating prizes, please contact me at: byerswarhammer@gmail.com.
Location

*(There are many nearby dining options - food is not provided by the event, though limited concessions are available for purchase at the store.)

Trophies, product and/or store credit will be given for the following categories: Best Painted, 1st, 2nd, 3rd Overall, Best Sportsman, and The Spoon.

Additionally, should we have enough support raffle prizes will be available with drawings staggered throughout the event. All players will receive a ticket upon check-in at the event.

List Restrictions
Please contact me in advance of the event if you have concerns, exceptions can be given at the TO’s discretion.
While a display board is not required- having some form of suitable presentation for your army will be factored into the overall score for best painted. An example of the rubric can be found here.

Players have the option to bring 1 or 2 lists. If a player chooses to bring 2 lists, 1 must be Evil and the other must be Good. If a player is paired with another player who has only one list, the other player must play the opposite to their opponent to allow for a Good vs Evil matchup. In the event that two players are matched up that both have only 1 list, they will play against one another with their lists regardless of alignment.
Registration