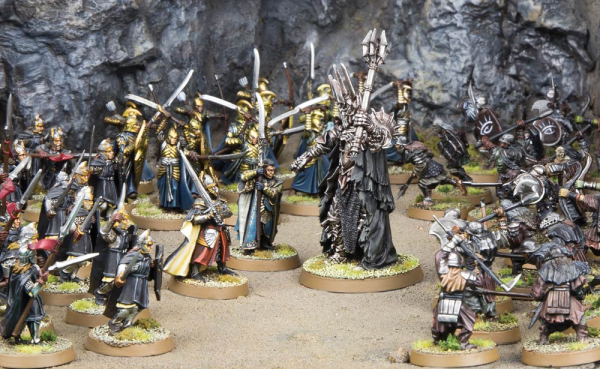 Looking to create your own armies within Middle Earth?
Welcome to the Middle Earth SBG Escalation Autumn League!
The focus of the league is to learn the game, to grow an army, and to get to know the community!

Note: Tuesdays will be the official game night, but players can schedule on other days as needed to make up games.

Details for games:
Games will be played as 1 v 1 with 9 games in total.
Missions will be announced for players each week from the Middle-Earth Strategy Battle Game: Lord of the Rings Rules Manual.

Players must maintain the same faction through the course of the league and that faction will be submitted when players register. If a player would like to switch their faction, they will be able to do so before their fourth game is played in the league. Players begin with an allowance of 200 points to build an army from their faction. As the league progresses, the allowance will increase until 800 points are reached (See schedule below). The final few weeks of the league will remain at 800 points.

Prizes and Event Wrap-up:
At the event’s end, November 29th, the players will vote for a Best Sportsman of the league and judge the Best Painted Army come that final event day. Both of the voted for players will receive an Atomic Empire gift card.


Note: At no point may a single model be worth more than half of your army’s total points allowance.


Schedule:
Opponents for each week of the event will be arranged by the League Administrator (Nathaniel Coffin, Zuzudakka#8981 on Discord).


If you have any questions about the League or are interested in scheduling a demo of MESBG, please contact us at: Nate424 at gmail dot com or byerswarhammer at gmail dot com. If you do not have an army or may not have everything for your list we do have some loaners available - please feel free to reach out!

If the league is full, please contact Nate424@gmail.com to be added to the waitlist.