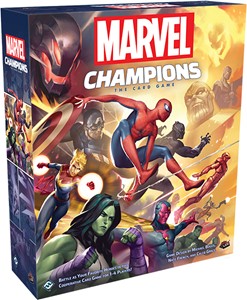 Come out and learn to play Marvel Champions! Harness the power of a hero in a cooperative Living Card Game of super heroics for 1-4 players!

The game brings the epic battles of the Marvel Universe to your tabletop. Each game sees the players selecting both their hero, and a scenario consisting of a villain and a scheme. Each villain and scheme has multiple forms, shifting the momentum and rules of the fight as the villain continues to enact their plans and the heroes race to defeat them with a wide array of powers and tools. Let the scheme advance enough times, and the heroes will lose the game. However, if you can fight through the villains various forms and thwart them with a combination of teamwork, skill, and luck, your team of heroes will emerge as champions!
Registration

Registration is not required, but it is appreciated!