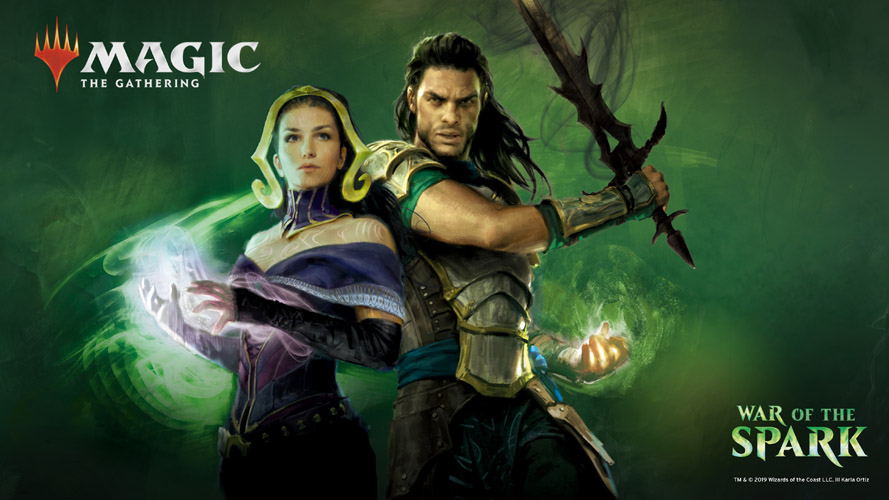 Join us for the War of the Spark sealed league! Players start with 6 packs of War of the Spark to build a 40-card deck. Each week, players add one pack to their card-pool. League product will be available for pickup starting at 5pm each week.

SIGN UP: To sign up players can pre-register for the league online. Players can also wait to attend the first Magic League Night on Wednesday, May 8th at 5pm to sign up and begin deck-building with their sealed pool. Once the league starts new players can sign up during league play. League play will begin each week on Wednesday at 6pm.

PRIZES: Awarded in packs based on record and attendance at the end of the league.

Preregister now or at the store on League night

A DCI number is required for this event! If you don't have one, you can visit https://accounts.wizards.com/ and create one to save time before the event.

1) Players build a deck of at least 40 cards.
2) All other cards in the pool are considered your sideboard.
3) All pools will be kept at Atomic Empire in boxes provided by us until the end of the league.
4) Each week, players are encouraged to play as many matches as they can. Players will receive 1 point for their first 3 league matches each week. The first time playing a league member will award an additional point. After three league matches each week, additional matches will count for tiebreakers. 1 point will be awarded for a tiebreaker win. 1 point for 2nd tiebreakers will be awarded for each tiebreaker match.
5) When a player decides that they’re open for league play, they need only ask for their pool.
6) Players may decline a match invitation when offered to play a league match.
7) Every time a player wins a match against an opponent, they earn one (1) league point.
8) Any matches won after the third, or any additional matches against previous opponents will earn one (1) tie-breaker point.
9) If a player plays less than 3 matches in a week, they may not make up the missed matches (and potential league points) once the new week begins. A player may request additional time to complete league matches only through Atomic Empire staff.
10) Players can sign up at any point in the league.
11) If a player signs up during weeks 2 or 3, they are allowed to make up 3 or 6 matches, respectively, in addition to the 3 matches that they would normally play that week.
12) Once the week rolls over, they cannot make up any more matches and points will be earned as normal. If a player signs up during weeks 4 or 5, they are allowed to make up 9 or 12 matches, respectively, during the entire remainder of the league, in addition to their normal weekly matches.
13) Each Wednesday (or any day a league week), players must add one booster pack to their pool for $4.
14) If a player doesn’t purchase the additional pack each week, they may not earn any league points for that week. Any and all wins will instead earn tiebreaker points only.
15) Trading cards from a player’s pool to another player’s pool is not allowed.
16) Players will not register their sealed pool. If a player’s if found to be adding cards to the sealed pool from any additional magic cards, players may be disqualified from the league.