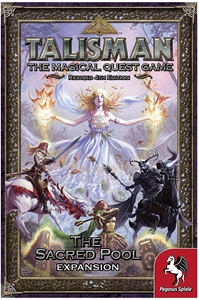 Fantasy Flight Games is pleased to announce the upcoming release of The Sacred Pool! This latest expansion for the classic board game Talisman brings new excitement and tension to your quest for the Crown of Command.

The inclusion of Neutral Alignment cards allow you to follow new paths in Talisman and possibly receive greater rewards...if you choose the right side.

The Sacred Pool introduces a number of optional variant rules that can be combined individually or as a whole to your Talisman games. If you would prefer a new, versatile end game, then simply include the Alternate Ending cards.