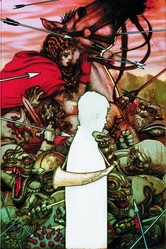 For the first time in hardcover - Bill Willingham's acclaimed series gets the deluxe treatment in this volume collecting issues #11-18 of the Eisner Award winning series, along with FABLES: THE LAST CASTLE. As Snow White recovers from a bullet to the brain, she and Bigby spend a lot of time in each other's company. But when they announce that they'll be vacationing together, all of Fabletown is shocked. The twosome are about to leave New York City and cross paths with a ruthless enemy lurking in the woods.