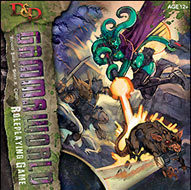 Earth. After the apocalypse. Never mind the radiation you're gonna like it here.

The D&D Gamma World Roleplaying Game offers hours of rollicking entertainment in a savage land of adventure, where the survivors of some mythical future disaster must contend with radioactive wastes, ravaged cities, and rampant lawlessness. Against a nuclear backdrop, heroic scavengers search crumbled ruins for lost artifacts while battling mutants and other perils.

This product is a complete, stand-alone roleplaying game that uses the 4th Edition D&D Roleplaying Game system as its foundation. It appeals to D&D players as well as gamers interested in fantasy science fiction set in a bizarre, post-apocalyptic world.