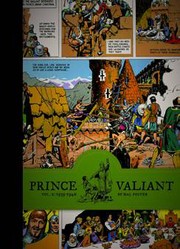 SWORD AND SORCERY AT ITS GRANDEST AS THE CLASSIC ADVENTURE STRIP CONTINUES IN SECOND VOLUME! For 35 years, Hal Foster created epic adventure and romantic fantasy in his legendary Sunday strip, Prince Valiant. Realistic in its visual execution and noble in its subject, depicting a time in which the fabled warriors of history and legends fought together for the greater good, it remains one of the great masterpieces of the medium. In this second volume, Prince Valiant helps his father reclaim his throne in kingdom of Thule, fights alongside King Arthur, and is made a knight of the Round Table in recompense for his bravery and wit. Bored by the peace he helped to create, Val decides to independently pull together the forces to battle the Huns' descent on Southern Europe. When Val's army breaches the Huns' stronghold, however, he discovers that corruption reigns still further west in Rome. Thus Val sets off with Sir Gawain and Tristam of Arthurian legend fame, and the familial kinship of the trio sees them through chivalrous escapades, false imprisonment and daring escapes. By the end of this volume, they go their separate ways, and Val boards a ship to Sicily-yet a storm approaches, throwing him off-course, as adventure follows him everywhere. Fantagraphics is proud to present these strips, which, thanks to the use of original proof sheets and advances in printing technology, are even brighter and crisper than when they were originally published 70 years ago. Foster's work, painterly and sweeping, is finally treated to the grand depiction it deserves. These illustrative, time-honored comic strips will enthrall old readers and just as easily awe new ones.