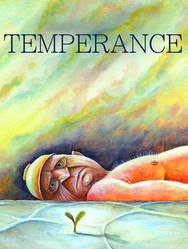 THE SECOND BOOK FROM 2008 EISNER 'BEST NEW TALENT' CATHY MALKASIAN Do ideas of war and enemies hold a people together? Is a culture of conflict too seductive not to be irresistible? These are the questions Cathy Malkasian explores in her second graphic novel, Temperance. Malkasian creates, as she did in the critically acclaimed Percy Gloom, a fully realized, multi-layered world, inhabited by vividly realized characters. After a brutal injury in battle, Lester has no memory of his prior life. For the next thirty years his wife does everything to keep him from remembering -and re-constructing- a society, Blessedbowl, that elevates him as a hero. Blessedbowl is a cultural convergence of lies, memories, stories, and beliefs. Its people thrive on ideas of persecution, exceptionality, and enemies, convinced that war lurks just outside their walls. They have come to depend on Lester, their greatest war hero, to lead the charge once the Final Battle begins. What kind of enemy could topple such a people and its walls? Mere memory, it seems, as Lester gradually emerges from his amnesia. Temperance is an eyewitness's account of recovery and awakening. The graphic novel works on two levels. It considers the concepts of violence, stories, and belief, and their place in holding a culture together, slyly echoing contemporary political issues in a nation at a stressful time currently at war with a ubiquitous enemy. Secondly, the fissures in Lester and Minerva's marriage is echoed in the greater political upheaval around them. Malkasian creates a densely textured social context, masterfully conveying the idiosyncratic physical domain with its spiraling structures and quasi-medieval architecture along with intimate yet plastic portraits of her characters in a rich, tonal pencil line. Temperance is a galvanizing work of empathy and violence by one of today's the most thoughtful and accomplished cartoonists.