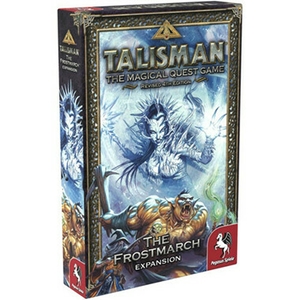 A continent of ice dominates the horizon. It is the Frostmarch, brought here across the Northern waters by the Ice Queen. Armed with the Crown of Command, she is transforming the realm into a desolate, frozen wasteland! The Frostmarch expansion for Talisman: Revised Fourth Edition introduces four new characters, plus new Adventures, Spells, and three new Alternate Ending Cards - including a final climactic battle with the Ice Queen!