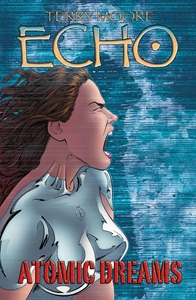 Julie is the unwilling host to remnants of an atomic alloy manufactured by the Heitzer Nuclear Research Institute, or HeNRI, for short. Pursued by an unstoppable HeNRI agent named Ivy, Julie runs and hides in the Nevada desert, aided by the unlikely allies of a gang of bikers and park ranger Dillon. But there is another: a nameless madman who stalks Julie and her precious alloy, leaving a trail of death and destruction in his path. It's a race against time in the new hit series by Eisner Award winning creator, Terry Moore. Collects #6-10.