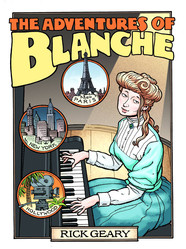 Iconoclastic cartoonist Rick Geary chronicles the extraordinary adventures of an equally extraordinary woman of the early twentieth century in The Adventures of Blanche! Blanche begins her journey with a refined piano professor in New York, but soon finds herself entangled with a brazen portrait painter, subterranean societies, and shocking secrets behind the New York subway system. From there, she's off to Hollywood, where her stirring talents bring to light the labor movement's struggles with the motion-picture studios. Then, in Paris, after a pleasant ocean voyage, Blanche arrives to find a canceled concert tour, a murder, and mysterious old memories.

Long out of print and collected here for the first time, these quirky and nostalgic tales of Blanche get the deluxe treatment in this hardcover volume featuring an all-new introductory story!