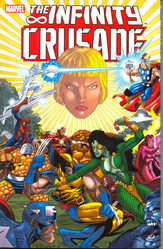 The Goddess has half of the Marvel Universe on her side, but if she doesn't get her way, she's ready to destroy all of it! The Fantastic Four, the Avengers, the Defenders, the X-Men, X-Factor, X-Force, the New Warriors, and more are turned against each other in her cosmic inquisition, and while Adam Warlock seeks answers within, could an even bigger crisis loom if ultimate power is stolen by...Pip the Troll?! Plus mayhem on Monster Island and a Drax/Thor grudge match, Destroyer against Thunderer! Plus a list of guest appearances too long to feature here!