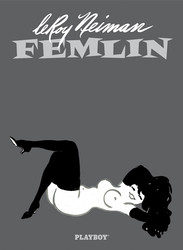 When LeRoy Neiman and Hugh Hefner met in the early 1950s, while Neiman was doing women’s high fashion drawings and Hefner was a copywriter in a Chicago department store, neither could have predicted that a twelve-inch woman called Femlin was waiting in the wings. But Femlin is mischievous. She’s spunky. And she knows how to strike while the iron is hot.

Fifty years later, Femlin is still going strong and sassy. Neiman has drawn her for every issue of Playboy for the last half-century, showing her at play, at sport, and at her ease. Wearing her trademark heels, stockings, and gloves—and not much else—Femlin has become a beloved icon of Playboy…and a celebrity in her own right. This book features text and images by Neiman, and an afterword by Playboy founder and publisher Hugh M. Hefner. • Playboy will celebrate the fiftieth anniversary of the Femlin with a special feature in the August 2007 issue of Playboy magazine. • In addition to the regular edition M Press will be releasing a slipcased, limited edition, numbered at only 250 copies and signed by LeRoy Neiman.