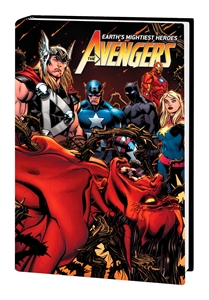 Jason Aaron's Avengers saga continues - from the dawn of time to the end of the world! Trapped in an icy cave millennia in the past, Tony Stark has lost most of his armor - and a good chunk of his mind. Back in the present, Earth's mightiest villains unite against a common threat: the Avengers! But even worse is an attack from within the heroes' own ranks! Mummies are rising from their graves. Secret armies march by moonlight from K'un-Lun to Wakanda to Greenwich Village. A dark god invades Asgard. And the Moon Knight is unleashed as never before! And if the Avengers can survive the Age of Khonshu, all that awaits them-is the Phoenix Force! It's searching for its latest host, and many of Marvel's most powerful figures are contenders! Who will be the new Phoenix?! Collecting AVENGERS (2018) #31-45.