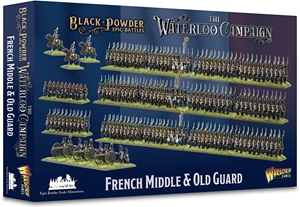 Napoleon created the Imperial Guard as an army within an army. To gain access to its hallowed ranks was the dream of many French soldiers. Better pay, food, uniforms and a swagger that carried them all over Europe – it was a post of great honor and they worshipped their Emperor. They were far from being palace guards however as long and active service made them crack soldiers who could be relied upon to get the job done.

This plastic set contains enough troops to field three Guard battalions (80 soldiers in each) with accompanying mounted officers. Old Guard are recognizable by the brass plate on front of their bearskin hats and the rear patch atop them. The Middle Guard bearskins didn't carry the brass plate or rear patch so these can be painted over as if fur. We have added a few extra heads; those who wish to further differentiate their units can replace some of them with the shako or the bonnet to convey the poorer supplied Middle Guard although it isn't mandatory!