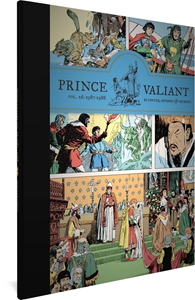 Arn takes his wedding vows in a milestone Prince Valiant strip The most visually opulent comic strip in the history of the medium celebrates its 50th anniversary with the marriage of Prince Valiant's son. Val goes in search of a northern spice route, which leads him into adventures among the Balts, the Greeks, the Lapps, and the Chinese. A Trojan Horse deception in reverse nearly wipes out Val's expedition, and a dreamlike encounter north of Cathay involves Yeti and other strange creatures. Back in Britain, Arn's bride strikes a blow against chauvinism and liberates the women of the village of Orr to exercise their true potential.