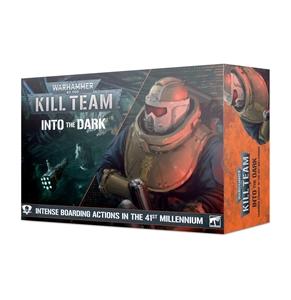 The new season of Kill Team kicks off with the Into the Dark boxed set as we explore the claustrophobic confines of the space hulk Gallowdark. This setting adds a new tactical dimension to your games as you and your opponent try and claim the advantage in brutal close-quarters fighting.

The box includes two brand new kill teams in the form of the Imperial Navy Breachers and the Kroot Farstalker Kinband. The former rely on brute force, clearing rooms with their shotguns, while the latter are more like a scalpel, clinically hunting their enemies and picking them off with surgical precision. The box contains 10 Breachers plus their two robotic companions, the C.A.T. and the Gheistskull, and 10 Kroot mercenaries with two loyal Kroot Hounds.

There’s also some incredible new terrain, recreating the layout of a space hulk on the tabletop in innumerable ways. As the season progresses, you’ll be able to add more walls, pillars, and hatchways, giving you a magnificent terrain collection that will be large enough for Warhammer 40,000 games.

A brand new season of Kill Team begins with Kill Team: Into the Dark. Includes 24x brand new Citadel Miniatures -- 10x Imperial Navy Breachers Kill Team and 2x additional Robotic Support, facing off with a 10x Kroot Farstalker Kinband Kill Team with 2x Kroot Hounds. 54x pieces of all new modular terrain and all the rules and accessories needed to play games of Kill Team in the confines of spaceships.