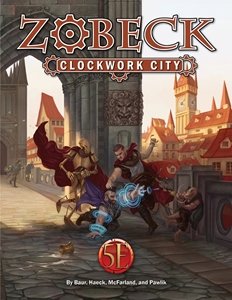 From the lofty towers of the Collegium to the dark and dirty docks to the dangerous Underbelly of the city itself, this is Zobeck, the thriving, bustling free city at the crossroads of Midgard. Noted for its clockwork ingenuity and its cutthroat politics, all sorts flock toward the city's opportunities, merchants and travelers, rulers and refugees. Some stay and some only pass through, but everyone has an angle.

Bring the city of Zobeck to life in your 5th Edition campaign. Explore its streets and chase golden dreams through city hall, collegium summoning circles, fetid sewers, and beyond.