We Are Venom Expansion - Marvel Villainous 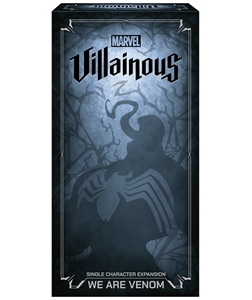 Become one with the alien symbiote in the latest expansion for Marvel Villainous: Infinite Power, We Are Venom.

In We Are Venom, players take control of the symbiote in its quest to successfully merge with Spider-Man, overpowering the hero and using his body for the symbiote’s own means. In order to overwhelm Spider-Man, players need to find the character and attach a number of symbiote tokens that is greater than his strength level.

Using various allies to Venom – including other alien symbiotes such as Riot, Agony, Lasher, Scream and Phage – players will be able to gradually wear down Spider-Man's strength and take over. However, players will have to contend with the webslinger’s team of allies, such as Black Cat, Scarlet Spider and Silver Sable, to successfully complete their goal.

Players will need to combine We Are Venom with either the core release of Marvel Villainous: Infinite Power or the marvel board game’s other expansion, Mischief & Malice.