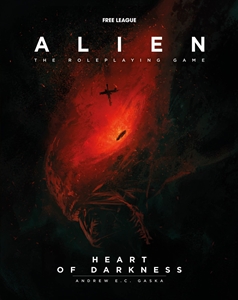 Heart of Darkness is a complete Cinematic Scenario for the ALIEN roleplaying game, written by sci-fi novelist Andrew E.C. Gaska. It is a stand-alone adventure, but also serves as a conclusion to the Draconis Strain Saga begun in the cinematic scenario Chariot of the Gods and continued in Destroyer of Worlds. The scenario is designed for 3 to 5 players plus the Game Mother, and is a spiraling descent into soul-crushing madness.