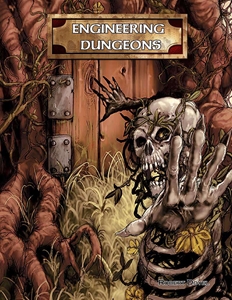 Beneath the crisp clear air of the world s surface lies dungeons, deep and cold, where stone passages lead to hidden chambers and rooms of treasure and wealth. In dungeons are the lost chambers of other worlds where mysteries belie the truth of past labors. But the shadow's dark hide monsters both foul and fair. Creatures who feast upon the unwary stalk these chambers and the undead are ever present. However, it is in dungeons that adventurers always seek their fare. Gold, glory, fame and more lie in the forgotten tombs of dead kings, in wizard's maze or the warriors stronghold.

Since the advent of fantasy gaming dungeons have been a mainstay at any gamer's table. They offer quick adventure with little need for backdrop or story and capture the mood and essence of adventuring. Making dungeons can, however, be time consuming and difficult. And more often than not dungeons that are thrown together create haphazard adventures that savvy players can pick up on. Engineering Dungeons brings the wearied Castle Keeper the tools to entice the imagination, to create, wholesale, from scratch, a varied array of dungeoneering experiences. You will find the means to determine monsters, their treasures, their lairs...who, where, and why a dungeon exists, and even flavorful aspects of the dungeon environment, such as light, air condition, and odors. Traps, of all sorts, designed to function as a universal difficulty system, are waiting... and so is adventure.