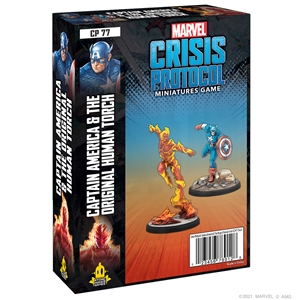 Two icons enter the battles of Marvel: Crisis Protocol in this new character pack! After receiving the Super Soldier serum, the once sickly Steve Rogers now fights for freedom as Captain America and this pack adds a new version of this iconic hero to player’s rosters. Joining him is the Original Human Torch, the android creation of the brilliant Professor Phineas T. Horton. Controlling the synthetic flames that envelope his body, he burns brightly to banish the darkness of the world. Together, they join players’ rosters along with two Team Tactics cards that help them support their allies.