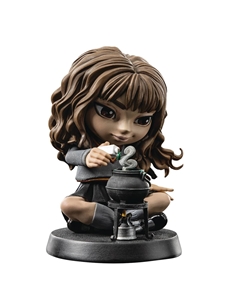 With her small cauldron heated by an oil burner in front of her, the most beloved wizard from Hogwarts School of Witchcraft and Wizardry crafts the polyjuice formula. Iron Studios presents Hermione Granger Polyjuice MiniCo! One of Hermione's unforgettable moments joins the MiniCo line for the 20th anniversary of Harry Potter's premiere in theaters. Presented in her classic uniform from Hogwarts, Hermione brings a new opportunity for Harry Potter fans to start their MiniCo collection!