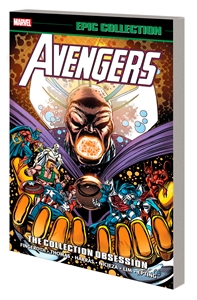 To battle the Brethren! Thane Ector and his allies devastated the Collector - and now they've come for Earth. And to stop them, the Avengers must call in reserves, returnees - and a new recruit! But will the humbled Elder of the Universe aid Earth's Mightiest, or renew his collection obsession? Hate may conquer all when the Sons of the Serpent strike - unless the Avengers and New Warriors can do something about it! But how will our heroes react when a fallen comrade seemingly returns? Plus: The Subterranean Wars rage, and the Vault prison becomes a death trap filled with deadly menaces - including Venom! Collecting AVENGERS (1963) #334-344 and ANNUAL #20, AVENGERS: DEATHTRAP - THE VAULT and material from INCREDIBLE HULK ANNUAL #17, NAMOR, THE SUB-MARINER ANNUAL #1, IRON MAN ANNUAL #12 and AVENGERS WEST COAST ANNUAL #6.