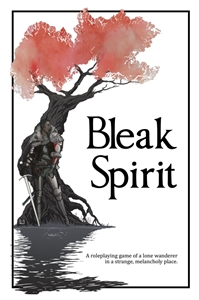 Bleak Spirit is a storytelling game where you and your friends create a brooding, cryptic tale about a stranger in a strange land. Everything is falling apart, crumbling, corrupted, and the wanderer carries the potential for a return to past glories – or the power to sweep away all that remains. Everyone contributes to the tale, sharing the sense of mystery that comes from no-one knowing the entire truth of what's going on. Everyone takes turns being the world for a scene, introducing lore which hints at the history of the setting.

After every scene everyone leaps to conclusions based on the lore which has been revealed – and these conclusions affect the sorts of lore they will introduce when it's their turn to be the world. Of course, everyone is going to interpret the lore in their own way, and introduce their own variations. You'll have to adjust your conclusions based on their input, they'll adjust theirs based on yours, and the story that results will be truly the creation of the whole group.

You will all also take turns playing the wanderer – the destiny-wreathed individual who is going to bring change to the world, one way or another. The wanderer is the one who faces the dangers of the world, who discovers the lore, and who will ultimately leave things different to how they found them.

At the end of the story the wanderer will enter a proving ground where they will confront an adversary. Everyone will have contributed their own lore to the tale but only one of you will determine who or what the true enemy is, and what sort of future the wanderer will usher in. Finally, anyone who is not currently playing the wanderer or the world will join the chorus. Their role is to elaborate on details introduced by the other players, drenching the world in both grandeur and decay.