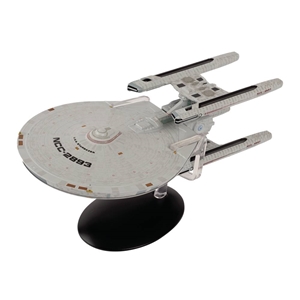 A Constellation-class starship commanded by Jean-Luc Picard for an historic 23-year-mission until its loss during a disastrous first contact with the Ferengi at the Battle of Maxia Zeta, the USS Stargazer is one of Starfleet's most storied ships. It is a rare example of a Starfleet vessel from the early part of the 24th century and is also unusual in being one of a handful of Starfleet ships that has four rather than two nacelles. The model of the U.S.S. Stargazer used in STAR TREK: THE NEXT GENERATION began life as a piece of set dressing in Captain Picard's ready room, aboard the U.S.S. Enterprise-D.

This collection commemorates iconic ships from every Star Trek TV series and movie, recreated with incredible detail as large hand-painted models and accompanied by a profile magazine.