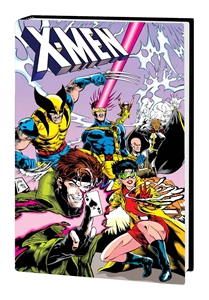 Exploding from your TV screen! The iconic X-Men: The Animated Series thrilled fans in the 1990s and defined the X-Men for an entire generation. And their small-screen adventures, inspired by the X-Men's classic storylines, were adapted into comic book form as well! Cyclops, Jean Grey, Storm, Wolverine, Rogue, Gambit, Beast, Jubilee and Morph are Professor X's Uncanny X-Men - ready to battle threats including Sabretooth, the Juggernaut and Magneto, Master of Magnetism! But when the giant, mutant-hunting Sentinels attack, one of the X-Men will pay the ultimate price! Plus: Cable and Bishop each arrive from the future, Rogue seeks a cure for her plight, Apocalypse unleashes his deadly Horsemen and more - including action-packed takes on classic stories including "Days of Future Past" and the Dark Phoenix Saga! Collecting X-MEN ADVENTURES (1992) #1-15, X-MEN ADVENTURES (1994) #1-13 and X-MEN ADVENTURES (1995) #1-13.