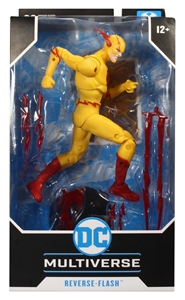 Obsessed with uncovering the secret of super-speed, a scientist from the 25th century named Professor Eobard Thawne traveled back in time to meet his idol, The Flash. However, when he learned the he was destined to become a villain and die at the hands of the Scarlett Speedster, Thawne went insane and became Reverse-Flash. The Reverse-Flash harnesses the power of the Negative Speed Force, which grants him many of the same superpowers as the Flash, but also allows him to travel through time. He often uses this ability to travel though time to continuously wreak havoc on the timestream and torment The Flash.

Incredibly detailed 7” scale figure based off the DC Multiverse. Designed with Ultra Articulation with up to 22 moving parts for full range of posing and play. Reverse Flash is featured in his outfit from the Video Game Injustice 2. Reverse Flash comes with 3 attachable Speed Force Lightning Pieces and a base. Included collectible art card with figure photography on the front, and character biography on the back.