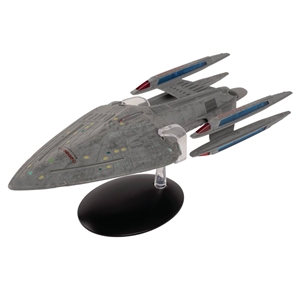 An experimental prototype designed for deep space tactical assignments, the USS Prometheus was a combat vessel far ahead of its time. The fastest ship in Starfleet at the time of its launch, it boasted regenerative shields, ablative armor, and even the ability to split itself into three independent, wholly functional sections - dubbed the "multi-vector assault mode". This hand-painted XL model captures the Prometheus in precise detail, just as it appeared in the third season of Star Trek: Voyager.