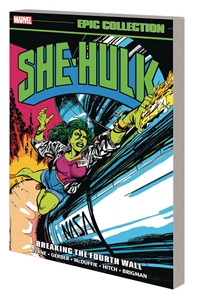 She's done being savage - now it's time to be sensational! Comics legend John Byrne launches She-Hulk's second solo series with a twist - because Shulkie knows she's a character in a comic book! As the jade giantess smashes the glass ceiling at her new law firm, she does the same to the "fourth wall" between character and audience - quipping with readers and arguing with her comic's creators as she takes on bizarre foes including the Circus of Crime, the Toad Men, Stilt-Man and Xemnu the Titan! Plus: Jen meets Golden Age hero the Blonde Phantom and learns harsh lessons about the rules of comics! The mayhem of Madcap! A wedding proposal like no other! And She-Hulk: The Movie?! Collecting SENSATIONAL SHE-HULK #1-12; SHE-HULK: CEREMONY #1-2; and material from SOLO AVENGERS #14, MARVEL COMICS PRESENTS (1988) #18 and MARVEL FANFARE (1982) #48.