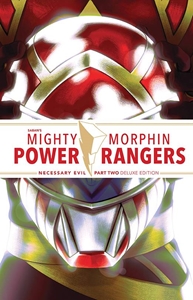 Lord Drakkon has returned! The evil, alternate universe version of Tommy Oliver brings a new agenda, new secrets, and a new mission from the most unexpected of allies. The Mighty Morphin Power Rangers and the all-new Omega Rangers have joined forces, but even the shocking return of The Ranger Slayer may not be enough to defeat Dayne, Kiya, and the full power of the Anointed.