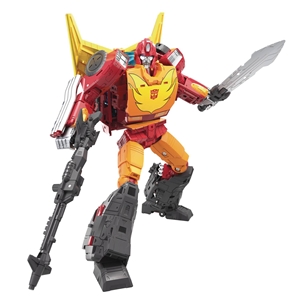 Rodimus Prime joins Commander Class! This figure depicts the brash and headstrong Autobot, Hot Rod, after he claims the Matrix of Leadership and becomes Rodimus Prime! This G1-inspired toy converts into racecar mode in 34 steps, then to truck mode in 8 steps. The truck trailer can store weapons and even transport Deluxe Class figures! The trailer also converts into mobile defense bay with twin missile launchers! Figure comes with classic G1-inspired Photon Eliminator Blaster, Matrix of Leadership with a light burst effect attachment to simulate a glowing aura, 2 smoke effects that attach to trailer pipes, and a Sword of Primus accessory inspired by the one featured in the comic books. Includes a Golden Disk card that reveals a possible destiny of a key character.