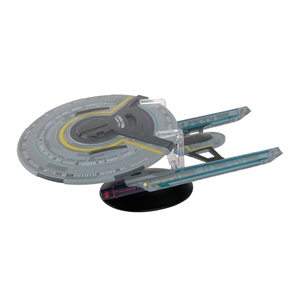 Rarely go where no-one has gone before... These highly-detailed, die-cast models capture the new starships introduced in Star Trek: Lower Decks. A hilarious new animated look at the Star Trek universe, The Lower Decks follows the crew of the U.S.S. Cerritos - the least important ship in Starfleet!

A California-class vessel operated by Starfleet, the U.S.S. Cerritos specializes in second contact missions, as indicated by its yellow markings. Its crew are charged with boldly going where others have gone before - following up on all the exciting first contact missions performed by other, more important ships!