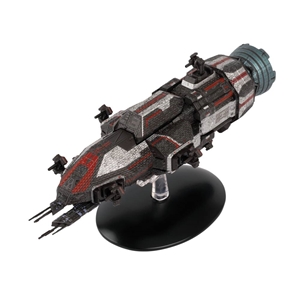 Hero Collector have signed an agreement with Amazon Studios to launch a new collection of ships from sci-fi series The Expanse. Debuting on Syfy in 2015, The Expanse is based on the novel series of the same name by James S.A. Corey. The show follows a group of characters throughout the now-colonized solar system trying to uncover the truth behind a conspiracy that could destroy an already fragile political Cold War and ignite open conflict. Season 5 premieres in December.

Collect the most iconic spaceships from The Expanse as high-quality, show-accurate models! A Hugo Award-winning TV saga of conspiracy, adventure and intrigue based on James S. A. Corey's hugely popular sci-fi novels, The Expanse has gripped audiences around the world with its depiction of a Solar System riven by civil war.

Originally a Corvette-class light frigate named the Tachi, the Rocinante was claimed and renamed by Captain James Holden. Armed with point defense cannons, torpedoes, and a spinal railgun, this versatile Martian vessel became a home to Holden and his ragtag crew - and played a key role in events across the Solar system.