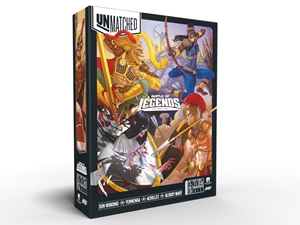 Unmatched is the critically acclaimed, best-selling game of tactical combat between unlikely opponents. Battle of Legends, Volume 2 provides an eclectic roster of four new heroes: Achilles enters a rage when his companion, Patroclus, falls in battle. Yennenga uses her hardy warriors to strike her enemies and shield her from harm. Sun Wukong unleashes an army of clones to befuddle his foes. Bloody Mary seems to be everywhere at once, striking with supernatural force and speed. The battle map, the Hanging Gardens of Babylon, includes new rules for higher ground, giving a bonus in battle. As with every Unmatched set, these heroes can face off against fighters from other sets, making it a must-have for experienced players or a great entry point for new ones. And it's all brought to life by the stunning illustration of Zoe van Dijk and Garrett Kaida with the peerless production quality for which the Unmatched line is known.