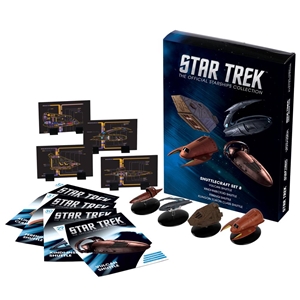 These four shuttles each represent one of Star Trek's more prominent alien species - from the iconic Vulcan Shuttle to the small, one-crew Toron Shuttle used by the Klingon mercenary Koral! Plus, the sinister (and notoriously difficult-to-steer) Xindi-Insectoid Assault Shuttle, as well as Quark's personal Ferengi starcraft, which he named Quark's Treasure before an illegal smuggling trip sent him through a time warp... and back to Roswell, 1947!