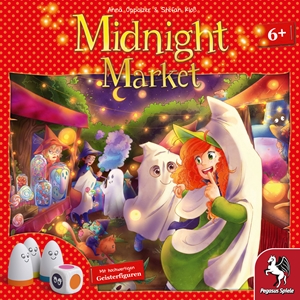 The Midnight Market is finally taking place again! But only adult wizards and ghosts are allowed to visit. Bad luck for the students from the nearby school for magic because it is the only place to buy wonderful delicacies and magical pets. You can even find the rare Vanishing Stars there. Ghosts use them to make themselves invisible.

"I would love to make myself invisible too!," says Anna. Amir has an ingenious idea: We could just dress as ghosts to sneak onto the market and mingle with the visitors! The others think it is a great plan. This way, we won't stand out. Maybe we can get hold of these Vanishing Stars? We can pull a lot of pranks with those! The students create teams of four and off they go.

In Midnight Market each player receives a team marker showing the associated students who have disguised themselves as fake ghosts and the team number. These numbers can be found on the bottom of the ghost figures, but they still secret at the beginning of the game. With the help of a color die, the ghost figures can be moved across the playing fields of the market. If two ghosts meet at a booth, the player who moved the second ghost receives one or two magical chips. In addition, chips are given to those players whose team the ghosts belong to. It is therefore worthwhile to keep in mind all the numbers that are revealed over the course of the game not so easy when the ghosts are constantly on the move!

Midnight Market expands the popular wizarding world of Wizardry to the power of three, Fabulantica, Mary Magica and Hexenhochhaus. The ghostly memory game includes a three-part scoring so that more than one person can win.