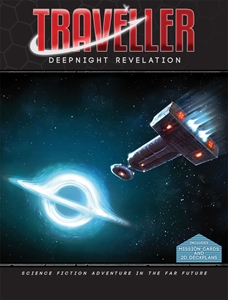 Welcome to Deepnight Revelation - the most expansive campaign ever produced for Traveller...

A converted heavy cruiser, Deepnight Revelation is one of the most powerful exploration vessels ever commissioned. Equipped for a twenty-year voyage, she will carry the Travellers on an epic journey from Charted Space to the edge of the Orion Arm. Deepnight Revelation must forge a path through uncharted systems and the territory of unknown alien races. Everything she finds will be new, and if she meets with disaster there will be no rescue.

Deepnight Revelation’s destination is a mysterious radio source at the mouth of the Great Rift. Described in the ravings of a madwoman as the place beyond everything, Terminus Point holds a terrible secret. Reaching it is only part of the mission; at Terminus Point the Travellers will face a desperate battle to prevent mass extinction on a galactic scale, and literally go further than any Traveller has gone before.